This extensive study centred on 2,328 chairside CEREC inlays and onlays which had been fitted to a total of 794 patients in a dental practice. Between 1990 and 1997 the CEREC 1 system had been used; between 1997 and 1999 the CEREC 2 system was used.

Forty-four teeth were randomly selected and examined under a scanning electron microscope. The average margin width was 236 μm ± 96,8 μm.

The success rate after nine years was 95.5%. Only 35 restorations failed, due mainly to the extraction of the teeth. There was no correlation between failure and the size or location of the restorations. 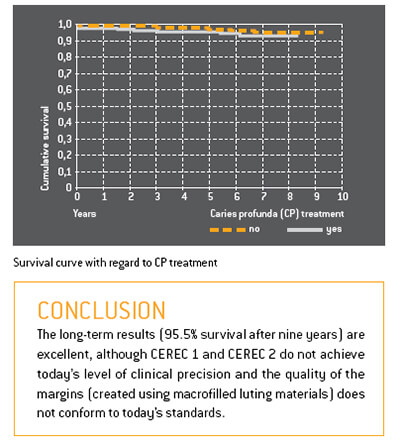 This study centred on 1,011 CEREC inlays/onlays which had been fabricated for 299 patients between 1987 and 1990 using the CEREC 1 system. The majority of the restorations were made of VITA MK I ceramic; only a small number (22) were made of Dicor MGC. As from 1989 enamel etching (phosphoric acid) was deployed in combination with the dental adhesive Gluma. Glass ionomer cement was no longer used as the base layer. Areas close to the pulp were protected by means of a CaOH2 liner.

The follow-up criteria were as follows: margin quality, change in vitality, tooth anatomy, complications, and failures.

The findings were categorized according to the following parameters: restoration size, restoration location, initial tooth vitality, and the use of dentin adhesive.

The precision of a milled CEREC restoration depends to a large extent on the quality of the data derived from the digital optical impression. The intraoral CEREC Bluecam has an innovative optical lens emitting blue light with a short wavelength.

The scanning accuracy of CEREC Bluecam is approx. 19 μm. This high degree of precision is equivalent to that of the reference scanner*.

Repeat measurements were in the region of 10 μm and the user influence was less than 12 μm. The results were not dependent on the type of preparation.

The images with CEREC Bluecam were taken in auto capture mode and approx. 4–6 exposures were required per quadrant. The software automatically triggers the exposure when the camera is positioned absolutely still above the tooth. CEREC Bluecam demonstrates a significantly improved quadrant precision in comparison to the CEREC 3D camera (34 μm as opposed to 42 μm). The low values of repeat measurements of approx. 13 μm demonstrate the high accuracy of the CEREC Bluecam. The user influence on the precision of the measurement results was extremely low (approx. 15 μm).

The marginal accuracy of milled CEREC restorations has continu-ously improved with each successive software version (from CEREC 1 to current version of CEREC 3D). With regard to the hardware, the introduction of the step bur (tip diameter: 1 mm) represented a major improvement. Within the framework of this multi-centre trial (seven universities) the marginal fit and internal adaptation of CEREC full crowns were measured and compared with laboratoryfabricated ceramic crowns. A group of trained CEREC dentists and a group of non-trained assistants each designed and milled ten molar crowns on the basis of standard models. The crowns (made of the VITA Mark II and Ivoclar ProCad materials) were placed with the aid of Variolink. Empress ceramic crowns sourced from a reputable dental laboratory were also placed.

CONCLUSION The marginal fit of CEREC crowns tends to be better than that of laboratory-fabricated ceramic crowns.

The performance of the luting materials and the chosen bonding technique have a decisive impact on the success of all-ceramic restorations.

Metal restorations rely principally on macroretention. By contrast etchable all-ceramic materials (silicates/disilicates) are luted directly to the hard dental tissues and rely on microretention. The bond-ing of CEREC restorations (VITA Mark II, Ivoclar Empress CAD) does not differ from the bonding of laboratory-fabricated inlays, onlays and veneers made of comparable materials. This procedure has remained virtually unchanged since the introduction of dentin adhesives in 1991.

The first step is the CONDITIONING (e.g. etching) of the enamel, dentin and ceramic with the goal of creating a clean micro-roughened surface.

This is followed by the application of a PRIMER, the function of which is to make the clean surface wettable for the hydrophobic bonding material. The third logical step is BONDING – i.e. the application of an unfilled bonding resin, which forms an intermediate layer between the tooth surface, the luting composite and the ceramic material.

Older adhesive systems consist of separate products for each of these steps. The newer systems try to reduce the number of bottles needed.

CONCLUSION The adhesive bonding of silicate ceramics has been proved over a period of many years. The various materials must be carefully matched.

High-strength oxide ceramics such as inCeram, aluminium oxide and zirconium oxide do not lend themselves to etching and hence can be conventionally cemented. Self-adhesive luting materials have meanwhile become available.

This ten-year study compared CEREC 2 inlays which had been luted either with chemically cured or dual-cured composites.

Shortly after the introduction of CEREC there were naturally no long-term studies to draw upon. It was therefore necessary to establish whether the width of the luting interface (i.e. the thickness of the luting composite layer) had any influence on the marginal seal.

All the investigations showed that it was advantageous to locate the restoration margin in the enamel. This in vitro study (which involved dye penetration tests) showed that the thickness of the luting composite layer did not have any influence on the marginal seal. Subsequent long-term studies of CEREC 1 and CEREC 2 restorations confirmed these findings.

CONCLUSION The thickness of the luting composite layer does not have any influence on the marginal seal.

In relation to deep cavities the question is whether a liner plays a beneficial role for the protection of the pulp.

According to a study carried out by N. Krämer/Erlangen the occurrence of initial hypersensitivity doubled in cases where a liner was laid. The failure rate of ceramic inlays (in this case Empress) trebled when a liner was deployed.

3.1.3 WEAR OF THE ADHESIVE INTERFACE

The current version of CEREC 3D includes a variety of tools for mapping the patient’s occlusion and articulation (static and functional) and for the automated design of the occlusal surfaces.

- The DENTAL DATABASE contains various sets of data which can be selected according to the specific situation.

- CORRELATION creates a precise and adjustable copy of the existing situation.

- REPLICATION enables the dentist to create an optical impression of any chosen occlusal surface (either contralateral in the patient’s mouth or from a separate model). This optical impression can then be placed manually on the preparation.

- ANTAGONIST maps the static occlusion of the antagonists.

- ARTICULATION maps the surface of a functionally generated path (FGP). 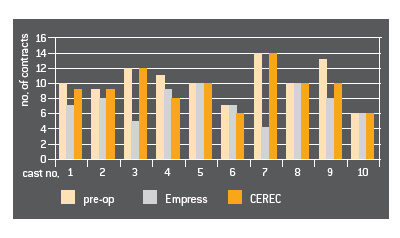 By combining DENTAL DATABASE, CORRELATION/REPLICATION with the ANTAGONIST and ARTICULATION tools the dentist is in a position to create functional occlusal surfaces on the computer monitor – manually, semi-automatically or automatically. These occlusal surfaces require only very little subsequent adjustment.

The manual reworking requirement can be reduced from approx. 400 μm (DENTAL DATABASE) to approx. 5 μm (CORRELATION plus ANTAGONIST).

Provided that the equipment parameters are set properly, the dentist can dispense entirely with manual corrections.

To determine the occlusal contact precision of CEREC crowns and laboratory-made Empress crowns respectively, models of natural teeth were measured prior to preparation and after placement of the restorations. This comparison did not reveal any significant differences between the CEREC and Empress crowns. Source: Frankenberger

CONCLUSION Precise occlusal surfaces can be designed on the computer monitor. These require practically no subsequent adjustment in the patient’s mouth.

CEREC inlays and onlays can be characterized with the help of ceramic stains. After they have been glazed they can be placed in the same way as laboratory-made ceramic restorations. Due to the special qualities of the CEREC ceramics (chameleon-like shade adaptation; wide choice of lightness, translucency and colour shades), staining is not necessary in most situations. The CEREC ceramics are easy to polish. In most cases the surface finish is in no way inferior to that of a glazed restoration.

CONCLUSION If the ceramic materials are correctly chosen and properly polished, laboratory staining and glazing are unnecessary in most cases.

After they have been milled CEREC anterior crowns can be stained and glazed. Alternatively, they can be incisally trimmed and then layered using a transparent ceramic material (in cases where especially transparent incisal surfaces are required).

Thanks to their graduated shading intensities, polychromatic blocks (e.g. VITA Triluxe or Empress CAD Multi) make it easier to imitate the natural teeth.

The CORRELATION programm allows the shape of the restoration to be simulated prior to milling. In many cases it is possible to create and place chairside anterior crowns during a single appointment. More sophisticated layering techniques are possible. However, these usually necessitate an indirect procedure using a physical impression and a cast model. Highly complex characterizations can be achieved in this way.

CONCLUSION Anterior crowns pose a challenge which can be accomplished during a single appointment with the help of polychromatic blocks and various characterization techniques.

More and more CEREC users are offering veneers as part of their treatment repertoire. Partial anterior crowns and veneers are frequently used as a tooth-conserving alternative to a full crown. Characterization can be performed using the methods described for anterior crowns (ceramic stains in combination with transparent ceramic layering materials).

In addition, “background shading” can be used in order to achieve natural-looking results. In this case composite shading materials are applied to the rear surface of the milled veneer. After the veneer has been placed this shading is visible through the thin sliver of ceramic material.

Fine-tuning, contouring and high-gloss polishing are performed after the veneer has been bonded to the tooth. The time input corresponds to that of a CEREC inlay.

VITA Mark II is the CEREC material with the longest track record. This feldspar ceramic is available in monochromatic blocks in a variety of 3D Master shades. This same material is also available in a polychromatic version (VITA Triluxe) with differently shaded layers.

Dental ceramics can be divided into two categories according to their microstructure:

1. Aesthetic enamel-like ceramics with a glass content in excess of 50%. The physical characteristics (e.g. strength, hardness, abrasion properties, opacity, and colour shade) can be modified by the addition of fillers.

2. Polycrystalline ceramics for frameworks. These consist of particles with an identical crystalline structure. These relatively opaque materials are much stronger than glass ceramics.

Nearly all these versions are available as conventional laboratory ceramics and as machinable CEREC ceramics. Polycrystalline zirconium oxide and aluminium oxide ceramics are reserved exclusively for CAD/CAM systems. 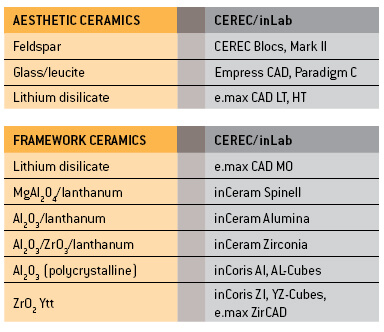 CONCLUSION CEREC and inLab systems can machine all the relevant types of dental ceramics and hence are future-compatible and universally deployable.

Veneering ceramics in particular have been criticized for causing wear to the antagonists and for being more abrasion-resistant than tooth enamel.

As long ago as 1991 Krejci demonstrated that VITA Mark II displays the same abrasion properties as natural enamel.

The surfaces of CEREC do not need to be polished or glazed. There is no difference with regard to abrasive wear and tear of the tooth enamel.

The abrasiveness of VITA Mark II does not differ significantly from gold. The material itself is abraded at the same rate as gold.

CONCLUSION CEREC ceramics do not damage the antagonists and display abrasive properties that are similar to gold.